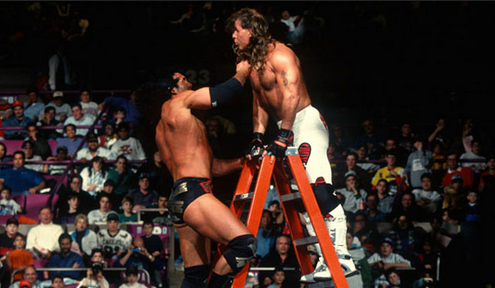 We all remember the classic Ladder Match from Wrestlemania X between Shawn Michaels and Razor Ramon. I decided to run this match in Fast Action Wrestling since a few people have asked to see a Ladder Match. Let's head to the ring...

As Michaels makes his way to the ring with "Sexy Boy" blaring through the speakers, Razor Ramon chuckles while staring down Michaels. When Michaels enters the ring, he dances right in Razor's face while talking trash. Razor feigns a swing at Michaels and Michaels makes a hasty retreat to a safe corner. The tension is evident between the two as they make their way to the center of the ring.

The bell rings and Razor Ramon immediately goes on the offensive, overwhelming Michaels with his size and strength. After knocking Michaels to the mat, Razor sets up the ladder to make an attempt at grabbing the title hanging from above. Michaels gets up and catches Razor Ramon right as he makes his second step onto the ladder. Razor hops down from the ladder, grabs Michaels by the hair, and then Grinds Michaels' Head into the Ladder. Razor Ramon then dominates Michaels for the next several minutes, with Michaels getting very little offense in. Michaels catches a break when Razor attempts a Corner Clothesline but Michaels hops over the ropes and Razor crashes into the turnbuckles. Michaels climbs to the top turnbuckle but Razor quickly recovers and hops to the second turnbuckle catching Michaels in an Avalanche Fallaway Slam. The crowd is loving Razor's domination in the match. Michaels is begging off Razor, but Razor is showing no quarter to Michaels.

While Razor Ramon is thoroughly dominating, Michaels continues to hang on by keeping the ladder out of the ring and doing all he can to prevent Razor from getting to it. After a tug of war over the ladder, Razor shoves Michaels to the mat and sets up the ladder. Michaels uses every bit of strength he has to pull the ladder, with Razor on it, such that title is just barely out of Razor's reach when he reaches the  top of the ladder. Razor is incensed and uses his weight to rock the ladder back and forth until the Ladder Falls onto Michaels with Razor still on the Ladder. Razor lands awkwardly hurting his neck when crashing onto Michaels with the ladder. Razor's momentum after the fall causes Razor to roll out of the ring. Razor is holding his neck in agony. The crowd is going insane chanting for Razor to get back to his feet!

Michaels sees the opening and rolls out of the ring to hoist Razor Ramon up for a Spike Piledriver on the ringside steps! The crowd mercilessly boos Michaels. Michaels rolls back into the ring, sets up the ladder, and starts to climb for the title... Razor regains his senses and hustles back into the ring in massive pain. Razor climbs the ladder and meets Michaels at the top, just as Michaels begins to reach for the title. Razor gives Michaels several sloppy punches at the top of the ladder, but Michaels is able to duck under one of the punches and get his arms around Razor's neck. Michaels hits a nasty Swinging Neckbreaker Off of the Top of the Ladder and after both men hit the mat, Razor starts to convulse in pain. Michaels, holding his back, slowly climbs up the ladder and grabs the title for a win at the 16:25 mark!

Note that there were only five moves rolled to get the result of the match. The "real time" length of the match was about five minutes. I used the Singles Ladder Match gimmick match chart for the gimmick spots of the match. Here's a look at some of the chart:

Here's a look at the Michaels and Razor cards: 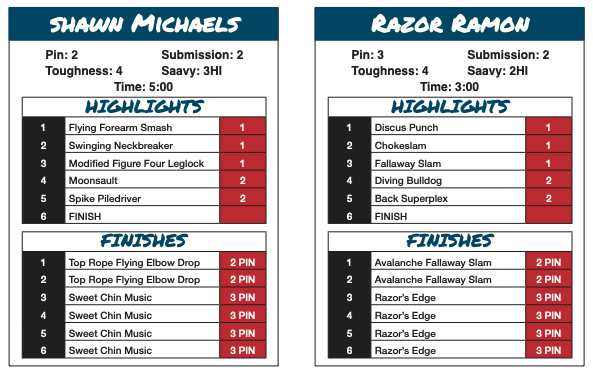 Also, here are a few snaps from my gameplay setup (the figures are just some 2" wrestling figures I found on Amazon): 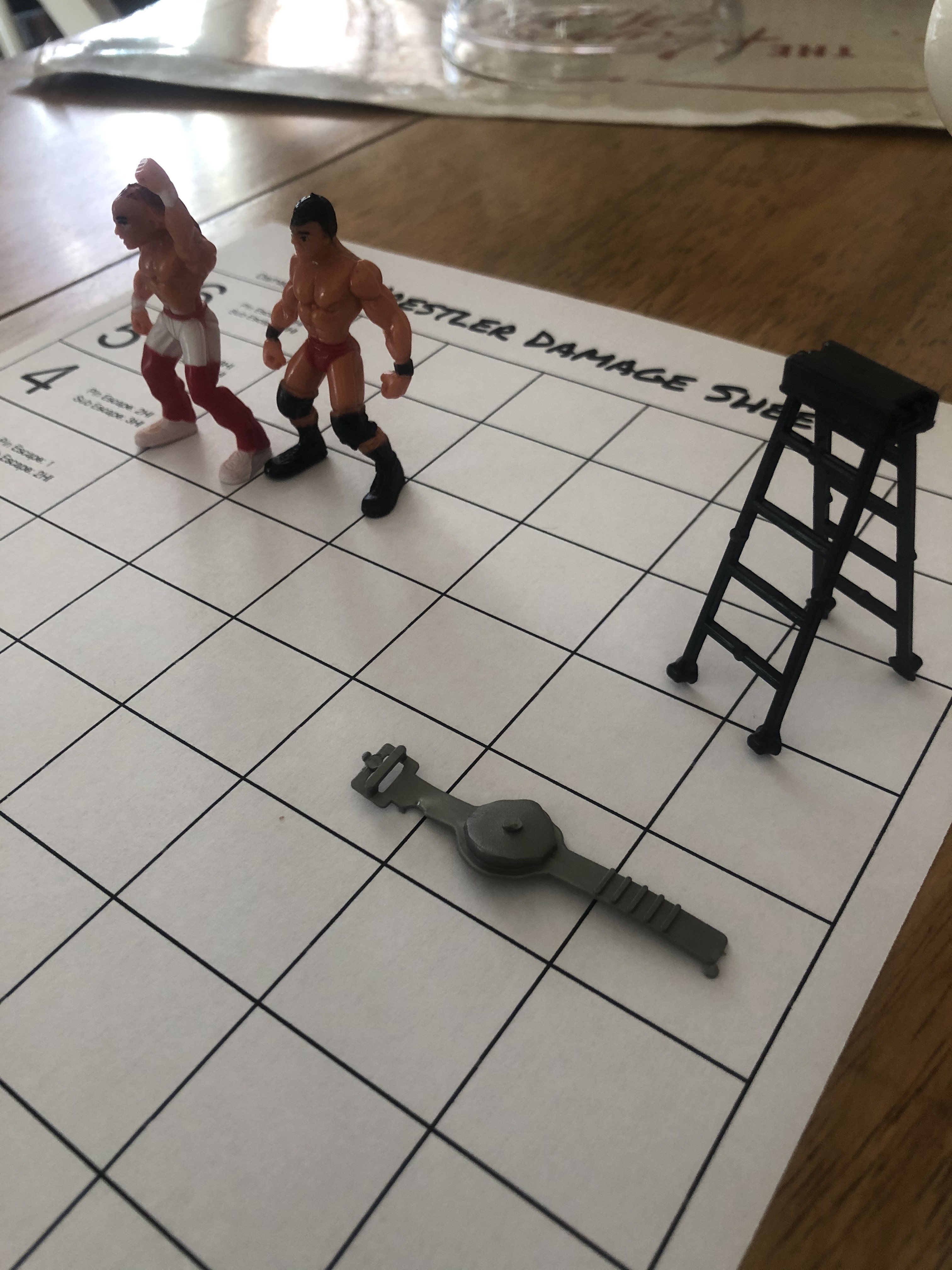 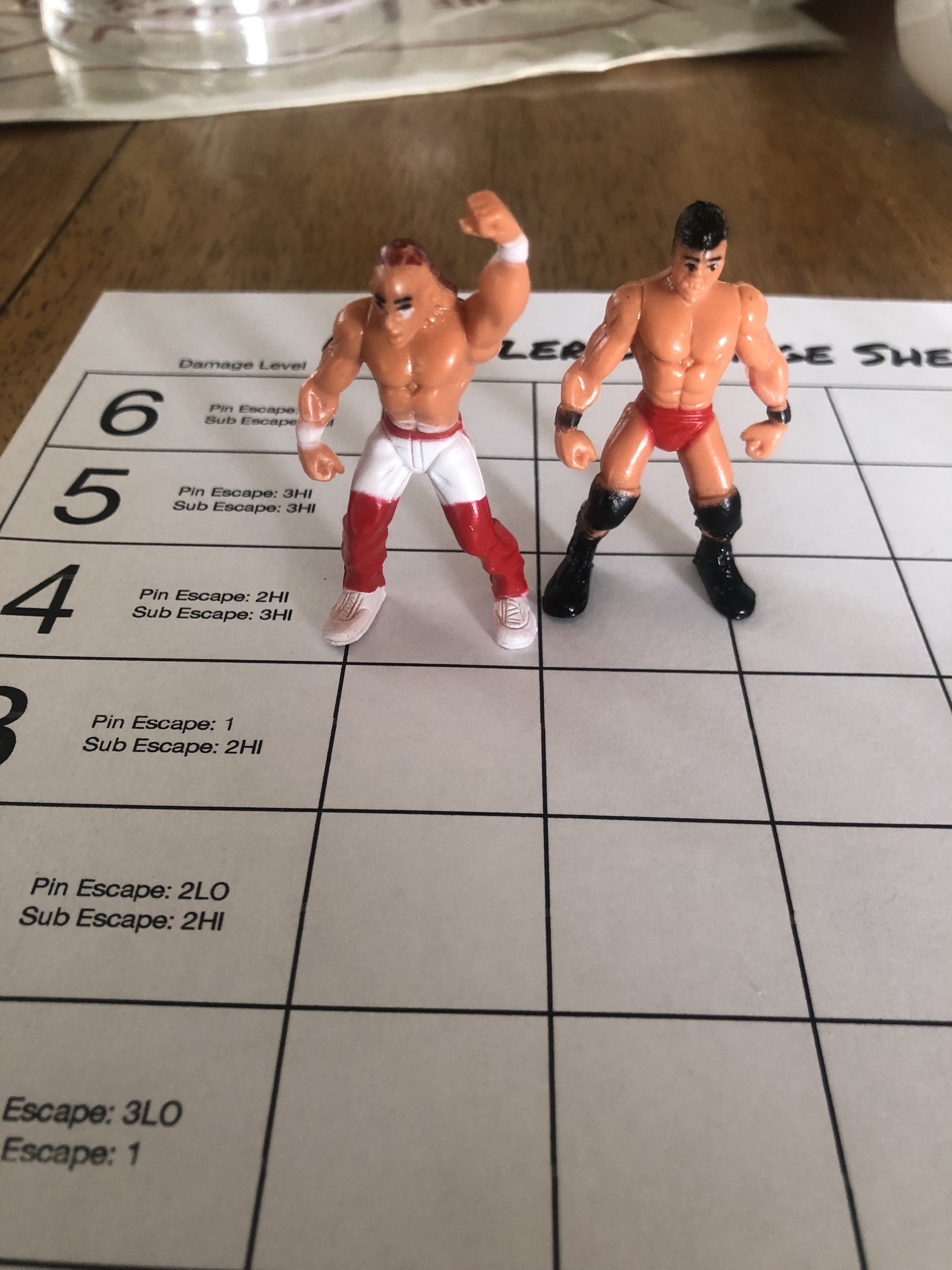 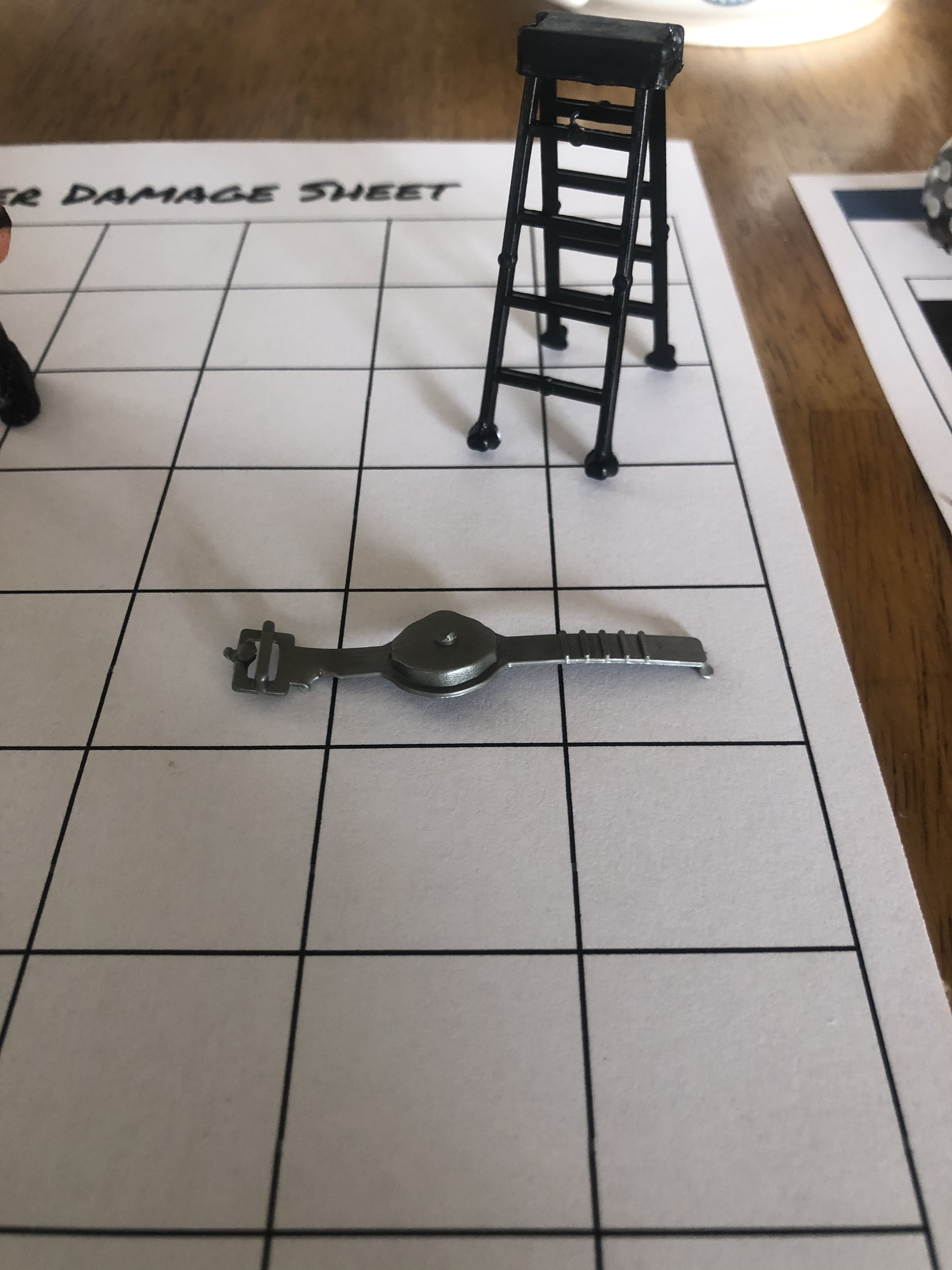