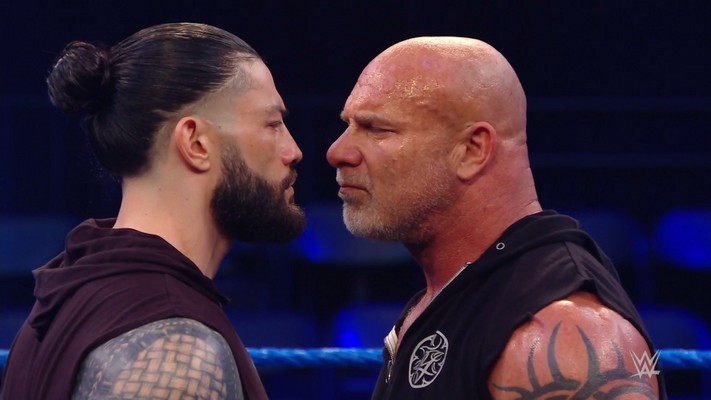 With the rumors swirling that the Roman Reigns/Goldberg match may not be taking place at Wrestlemania, I decided I would run the match myself in Fast Action Wrestling. Here's how it went down...

Reigns and Goldberg started the match off with an intense stare down. Goldberg took the first swing and that set off the action with both men brawling back and forth until Reigns dodged a shoulder block from Goldberg which sent Goldberg to the outside. Reigns then hit a Vaulting Plancha on Goldberg. Both men laid outside of the ring for a few moments until Reigns got up and brought Goldberg into the ring. Reigns seemed to be a step ahead of everything Goldberg attempted. Goldberg attempted to rush Reigns, but again Reigns was one step ahead and caught Goldberg mid-rush and hit Goldberg with a Sitout Powerbomb. Reigns continued to work Goldberg over until Goldberg snapped and countered with a Gorilla Press Powerslam which caused the crowd to erupt! Goldberg and Reigns continued to battle back and forth, but Reigns gave Goldberg some daylight and Goldberg muscled Reigns up with another Gorilla Press Powerslam!

Goldberg was solidly in control for the next few minutes of the match. Goldberg powers Reigns over with a Single Underhook Suplex, driving the crowd into an absolute frenzy! Chants of "Goooooldberrrrrg...Goooooooldberrrrg" start and Goldberg is soaking up all of the crowd support. Goldberg continues to pound Reigns, but with each shot Reigns staggers back to his feet. The Reigns fans begin to chant, "Ro-man...Ro-man...Ro-man", and Roman's confidence begins to build. Roman is taking everything Goldberg is dishing out and giving it right back.

While going at it, both men end up on the outside of the ring. Reigns connects with a  Drive By and Goldberg is stunned. Reigns brings Goldberg back into the ring. There are dueling chants between the Reigns and Goldberg fans in the crowd. The atmosphere is electric. Both men are brutally pounding each other attempting to gain an advantage. Goldberg shoots Reigns into the ropes and misses a Clothesline. Reigns comes back with a MASSIVE Superman Punch. The crowd nearly blows the roof of the arena! Reigns, exhausted, slowly crawls over to Goldberg and makes the cover: 1...2... KICKOUT by Goldberg! The fans CANNOT believe what they're seeing! Both wrestlers are worn down, but Goldberg gets to his feet first and lifts Reigns up for a Jackhammer. Reigns kicks his legs forcing Goldberg to over rotate on the Jackhammer, dropping Reigns to his feet, and giving Reigns the momentum to bounce off of the ropes. Goldberg turns to be met by a vicious Spear from Reigns. Reigns makes the quick cover:1...2...3!!! Roman Reigns pins Goldberg at the 24:19 mark.

A few things to note about this match. All of the moves in bold are the moves/highlights that were actually rolled during the match. Using the highlights as markers I filled in the details myself for the action between the highlights. That's the great thing about Fast Action Wrestling, you can "fill in the gaps" with as much or as little detail as you would like. If it's a house show match maybe I only care about the finish and the match time, but if it's a pay per view match maybe I want to add some flavor to what was rolled in the match.  It's totally up to you!

While the match time was 24:19, the "real time" of the match was about 7 minutes and I feel like I played it slowly! I also didn't use the heat die which can trigger a wide variety of events to occur during the match. I simply wanted a straight up match with no frills.